WHAT'S THE WAY TO COOL ?

Well it took me 24 hours to mentally regroup after the last calf strain debacle. Clearly I will have to re-adjust my goals and expectations. I was planning on 3 hard months of training followed by a fast and fulfilling race. I guess its time to take stock of the situation as the past 3 months of training have been little short of a disaster. As a result of 6 calf strains I have had many weeks with no running at all and a few with some decent 20k+ runs. The positives are that I have at least done some running and my strength training has been uninterupted. I have also had to crosstrain more, doing cycling, tabata cycling sprints, rowing, weights and lots of calisthenic type exercises. I have increased muscle strength whilst losing excess fat making me much leaner. This would be great if I had done the miles but I haven't. The most important thing in ultra running is what they call 'time on feet'. It doesn't matter how far you've run as long as you have spent many hours actually running because it is this training that enables you to :-
1) Burn fat efficiently therefore providing energy.
2) Maintain your level of fitness.
2) Learn how to balance your electrolytes, fluid and food.
3) Teach your body physically to deal with the 'stress' of running along way.
4) Train your mind to withstand the negative mental fatigue that comes with spending many hours on your feet.
And it is these issues that are causing me the most worry. By the time I get to California I will be lucky if I've done a third of what is neccessary....so, what to do ?
I have to now rest for at least a week and then try and do some running in the last two weeks. There is little point in tapering because I haven't done enough to need a taper. I have decided to do my own version of 'wave training'. Instead of building up to a crescendo of activity over 3 months and then tapering down to conserve energy before the race (which is the normal way to do it), I  will build up the miles again slowly ( as I've done about 4 times now)  and as I approach race day turn the race itself into a massive training run. Its a little unorthodox but some very fit people do it this way. I, of course, don't have a choice and I could still get hit with another injury but this seems to be my only option. Again, any advice on this will be gratefully received.
I was talking to a friend of mine the other day about 'Aid stations'. He seemed to be under the impression that you run a bit, then sit down at a bar for 10-15 mins, have a few drinks and a chat and toddle of to the next one. I think he thought ultra running was an enourmous pub crawl, in fact he seemed quite shocked when I told him that I usually stop for about 10 seconds, 'Do you mean you run the whole way ?'.....'well yes thats the general idea.' If I told you my friends name was Nick Davies then a few of my local readers will not be suprised in the least.....
So what are my expectations for the 'Way to Cool 50k'. I guess the goal is quite simply to get to the start line in at least a semi-fit state and 7 or 8 hours later get to the finish line, in whatever state! There are so many reasons why this might not be possible but I 'll just have to get on with it and as Jamie would say 'suck it up'. With the bad luck I've had in my race preparation I fully expect to get food poisoning on the plane, lose my bag of running gear at the airport, have no hotel or car booked, get attacked by a bear, fall asleep in a bush due to jet lag....and worst of all for my pride,......come last ! Still, the way I'm thinking now, coming last and finishing may just count as an achievement.
Helen, my physio, has now gone 'nuclear' with creams, special tape, leg warmers and my own machine to plug into 3 times a day. This basically means attaching electrodes to myself and sending currents up and down my leg, I can actually see the leg muscles throbbing, a very bizarre experience. 'Don't turn it up too much or you'll hit the ceiling!'......'Whats this button here for ? I said whilst pressing it......

TRIALS OF TRAINING ON TRAILS

With 4 weeks to go to the W2C 50, I resumed proper training last week. Small 10k runs and lots of strength work. Its not ideal as I should have been doing very long training runs once a week but both my physio and coach had advised me against this as it was too risky due to my calf strains. Every time I get a small twinge whilst running I think its about to happen again, its a bit stressful but thats how I feel. Helen has been pulling and probing and smoothing out all the scar tissue and Paddy has insisted on less running. I focus on weights and stretches to build my legs and core muscles and cycling tabata's to keep me fit whilst avoiding unneccessary stress on the muscles. Its all quite technical and measured however at some point I knew I would have  to go for a 'long run' including hills and as time is running out it had to be soon.....this is not quite how I had envisaged my prep for the Way to Cool but I have had to adapt as best I can.  I've been averaging only 40k per week when it should have been at least double that. I really am totally in the dark on how all this will pan out on race day......still, just got to get on with it.
Anyway at the end of last week I did my first longish run of 24 k and though it all went well, I was worried the whole time. This week I did a few more 20+ k runs and had a few nasty falls accompanied by strange shooting pains in my legs. You don't know whether to ignore them and soldier on or stop and take it easy......so confusing. I guess I will just keep ramping it up whilst closely monitoring any ill effects. If I can get my fitness level back up then Paddy and I will need to discuss how to taper for the race because I won't have much time to prepare.
Its been freezing cold here in France, as it has in the whole of Europe, so its my full winter running gear, hats, gloves, special warm running tops and long slinky black tights. I hardly ever see another runner but the other day ( at about - 10 degrees ) a guy appeared out of nowhere waring identical gear to mine and we kind of nodded to each other in that kind of mutual respect, tough guy way,.......blissfully ignoring the fact that we both looked like a couple of Russian ballet dancers !.......male ones I hasten to add. And then later on I encountered a female runner, who completely ignored me. A guy could get a complex. 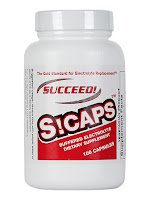 Finally after many months of trying, my S-Caps finally arrived. Its impossible to get them in France and so John in California kindly offered to buy some locally and ship them over.......Now what am I going on about? An S-cap is not some trendy beach, go faster head gear, its a tiny capsule full of sodium and potassium. Actually there is a lot more to it than that but I don't want to bore you, they were developed by ultra runners for ultra runners and their main function is to prevent Hyponatremia and cramps by giving the body the required amount of electrolytes during very long runs...........so now you know.
Although I love running through the forests and mountains its not all fun. Training for any big event has its ups and downs and it can be hard, tiring and relentless. I am constantly told 'Oh you do it for the runners high'. This really is a bizarre statement as it implies that every run is easy and I'm on a permanent 'trip'. Unfortunately this is not the case; I have previously posted that I have never had a runners high in 1000's of hours of running, (maybe I'm doing it wrong), the truth is sometimes its great and sometimes its very, very hard. On the hard days I focus on the goal and on the easy days I concentrate an getting a good suntan :)
INJURY ALERT.......I was just about to post this blog but this morning I was 20 minutes into a run and BANG! my sixth calf strain. No warning at all in fact I was feeling great at the time.......Its 3 weeks to go to the Way to Cool 50 k and right now I'm lost for words, a first for me.