I think I need to square the circle on all my stress tests, fitness, ultra running and AVP heart condition. I have now had two stress tests, one on a running machine and the other on a bike.....the reason for two is that the first one didn't work as I was 'moving around too much' and so the reading was faulty. Now correct me if I'm wrong but there are only two methods and surely I was not the first person to move around too much on a running machine ! Anyway the Doc insisted I do it again 3 days later. I can see why its called a stress test because they push you to exhaustion and I could hardly breathe at the end.........but what were the results? 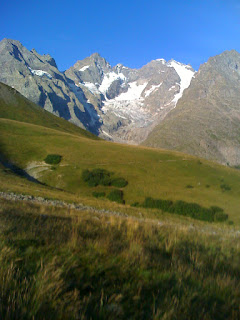 Well this being a French clinic I recieved a computer print out so large  I could have probably wallpapered my living room with it. My consultation (after nearly killing myself) lasted all of 30 seconds. 'You are very fit and your 'art' is very strong....it was a very good test'. - Okay but what of my AVP and all the other stuff ? - 'I see no problem..........if you choose to run up mountains that is up to you but there is nothing in this report that says you must not do it', and with that I was shown the door. Well at least it was quick.
Next was my fitness/fat test with my coach, Paddy. 'You are the fittest, leanest guy over 50 that I have ever coached and you have the body of a fit 40 year old......and 11.2% body fat which is fantastic......why don't you try Ironman Triathlons ?'
Confused....just a bit. This whole thing began with the Mayo clinic report and I have discovered much since then but my personal reports seem to show that yes, I have a minor heart defect (which could kill me) but in itself should not stop me from doing what I do as long as I train efficiently and maintain my level of fitness.............and Paddy thinks I should swim and cycle race as well... Crikey.
Yesterday I bumped into my local doctor as I was about to arrange for a consultation to get a full overview of all this. There we were in the car park and after giving him a brief explanation of my MPV condition and the other tests he laughed, slapped me on the back and said 'no need Phil..... you're fine I suggest you go run up a mountain'......and then walked off !
So there you have it:- at one end of the spectrum  my 'don't tempt the devil' doctor thinks I should stop running altogether and at the other end its 'go run an ultra and have a nice day'.
To be honest its all down to the personal choices we make in life and after all this research I 'know' more and so can take a more informed decision about what I will and can do and I'm fine with that. I will take it all step by step and 'listen' to my body.....if I feel okay then I will carry on and if I feel a bit weird then I'll take it easy.......I guess its just common sense.
As the Delphic oracle said 'Know thyself' and 'Nothing to excess'.........or as Roy Rodgers said 'Happy trails'
Last weekend Sue and I went up into the Alps and I did a early morning run on Sunday, it was breathtaking, quiet, fresh and still.......I was in an almost zen like state.....and despite stress tests, healthy nutrition and disciplined training it still all comes down to the simplicity of doing something life affirming in your own little corner of a beautiful Universe.