Phil Jeremy Personal Training: FIRE AND RAIN - ALL WEATHER TRAINING.:     At present I am in the serious summer heat of the South of France and all I hear is people going around saying, 'It's far too...
Posted by phil at 9:57 AM No comments:

FIRE AND RAIN - ALL WEATHER TRAINING.

At present I am in the serious summer heat of the South of France and all I hear is people going around saying, 'It's far too hot to train in this heat', perversely I would hear the exact same opposite statement in Yorkshire in the cold winter. I guess for the great unfit, overweight and lazy it is never the right time... ces't la vie. 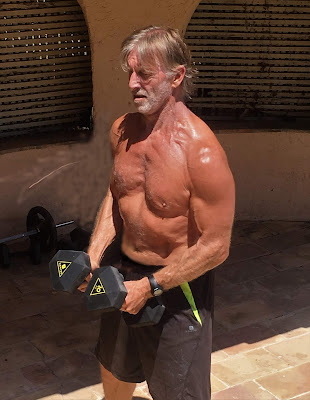 Training in poor weather be it freezing cold or boiling hot needs some thought. I have run up mountains in horrendous weather but there was a reason and that was to train in conditions I may find myself in a race. I have always adapted training both for myself and my clients to their ability, their goals and also to where I am and the conditions that exist at the time. I see no glory or benefit in doing press ups in a puddle, KB swings in horizontal rain or deadlifts in a snowdrift, athletes don't do it so why should you.
Of course there are many exercises that you can do in bad weather but you have to use a degree of common sense. You can run in all weathers in fact running in the rain is exhilarating and it keeps you cool. One of my clients, Mike, reminded me of a tip that I gave him awhile back which was if you wear a cap when running in the rain you hardly notice it all and I still believe that to be true. Sprinting on an all weather running track is also a great exercise in very cold or wet weather but personally I wouldn't dream of lifting weights outside in the rain, it's too easy to slip or have bad form and injure yourself, it's just plain stupid. If you have some cover or shelter from the elements then fine but otherwise its meaningless. I read comments that somebody was lifting heavy weights in a torrential hail storm with thunder and lightning all around and what a legend or bad ass they are. What do you want... a cookie? Its bullshit. I'm afraid the word 'legend' is grossly overused, Alexander the Great is a legend, so let's put this into perspective.

If you want to walk the dog, go for a brisk hike or a short jog then fine but if you want to train effectively to achieve a long term goal then you must target the right muscle groups in the right way and in the right conditions in order to elicit the maximum response.

Training in very hot weather is tricky. There can be benefits such as doing a 'heat run' but again this is a targeted exercise for the reasons of adaptation, the same would apply to cycling. Elite cyclists train in hot weather (as well as altitude) as this will cause the body to produce more red blood cells and you can gain significant improvements in your VO2 max.Studies have found that, in addition to an increased rate of perspiration, training in the heat can increase an athlete’s blood plasma volume (which leads to better cardiovascular fitness), reduce overall core temperature, reduce blood lactate, increase skeletal muscle force, and, counterintuitively, make a person train better in cold temperatures. In fact, heat acclimation may actually be more beneficial than altitude training in eliciting positive physiological adaptations, says Santiago Lorenzo, a professor of physiology at Lake Erie College of Osteopathic Medicine and a former decathlete at the University of Oregon.
Sprinting can be helpful but if it's too hot then your performance will suffer so they will need to be short sharp sessions such as 12-15 second OTM (on the minute) hill sprints.
If you are not used to doing anything as extreme as this, I would advise having a medical check up beforehand.
Swimming is obvious in hot weather as long as your not just lying on your back doing impressions of a sea lion or floating on some giant inflatable rubber duck. I would particularly recommend pool sprinting, it's a surprisingly demanding yet effective form of training with no impact stress.  If you like training outside, as I do, then weight training is fine if you are in the shade but again common sense should prevail, keep the sessions short. Tempo running in hot weather should be kept to about 70% - 80% of your max heart rate as it is extremely demanding …. then again I know many of my clients think that Tempo running should be avoided altogether!

It's all based around the risk /reward ratio, what is going to be the most effective and hopefully enjoyable training that you can do that will engender the greatest benefits? 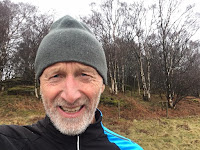 This year we had heavy winter snowfalls in Europe so running in the snow was an option if you have the right cleats, in fact on a
brisk morning it's exhilarating. The air temperature keeps you cool and you can just go out and enjoy yourself in raw nature, I love it. I did quite a few of these extreme cold weather runs this year however on one occasion I ran in the wet, over very rocky terrain but with the wrong trainers on and I slipped, cut my head open and needed stitches. It was stupid and lazy of me and I should no better but hey, shit happens.
Now across the globe we have had record summer temperatures so again you have to adapt your training accordingly. I look upon these changes as an opportunity to vary my training schedule and so provide a different stimulus therefore improving your fitness, strength and overall conditioning.
There are exceptions of course. In many countries this year there have been raging fires due to the dry conditions. I would have thought common sense would tell you not to train near a wildfire but apparently some people like the risk, a bit like Tornado chasers. The US Environmental Protection Agency actually issues warnings and advice, as do other countries. Remember if the fire doesn't get you, the smoke will and if that doesn't, the heat will, so forget about it. The general advice is that you need to be at least 10 miles away. And even after a fire you should be careful, don’t trust a dust mask to protect you as in addition to fine particles, wildfire smoke also contains a mixture of gases, including toxic carbon monoxide that the masks don't filter out. So you might think you look cool like Bane in Batman but actually you look like a weirdo. 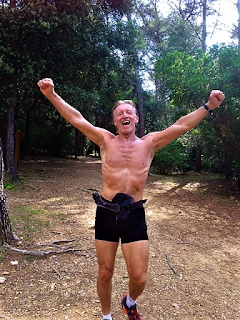 High humidity is another issue that can cause difficulties
The risk of overheating, heat exhaustion or Hyponatremia is obviously higher during humid workouts because the body is working harder to cool off in the saturated air.  The more humid it is, the more water there is in the air, and thus the evaporation of sweat is more difficult. Today I ran in 83%  Humidity which is very high, it was tough but I had an interesting result. My time over a course which I have run for over 10 years was the fastest ever! My average time is 58 minutes and yet today I did it in 46 minutes despite the heat.
This was not an isolated case as just over a week ago the same thing happened. The predicted weather was to be over 30c (90f) and I had scheduled to do a 20k trail run in the hills near where I live so accordingly I got up early in the cool of the morning. It got super hot towards the end but the majority of the run was in shade. I normally go through .75 of a litre per hour but took extra due to the heat, when I got back I found that I had drunk 1.25 litres per hour.  I also consumed 1/2 litre of neutral pH balance sports drink plus 2 x S-Caps (salt). In more extreme weather you have to be diligent both in your preparation and execution. The surprising thing in these challenging conditions is that I took 8 minutes off my fastest time on this route too. There are many examples of athletes setting record times in extreme conditions so one must not automatically presume that your performance will suffer.

In my case there is no doubt that these personal best times of late are as a result of  my strength and metabolic conditioning workouts, not more running. I have completely redesigned my metabolic training by utilising all three energy pathways in a variety of ways, such as intensity, heart rate % of VO2 max, rep range, TUT and rest periods as well as sprints, tempo and short threshold runs. I have been consistently alternating the workouts to try and increase my lactate threshold and it appears to be bearing fruit, even in this weather.

It is for these reasons that I never once think of the weather conditions as a convenient excuse not to do it but more as an opportunity. My clients know this and so we can have fun playing around with the different options. Sometimes I will present them with a choice of training options on a given day and let them decide; although the comments I get seem to be along the lines of, 'What sort of choice is that?.... to which my reply is usually 'Stop moaning'. As you can see, not only am I an extremely understanding trainer but also a hell of a nice guy. 😊😊
Even in the South of France in the summer I see people jogging along the road with no hat or water. It's either ignorance or stupidity as I would have thought by now most people will have heard of dehydration. Then again in the Grand Canyon there are countless signs warning you not to venture down without the proper clothing, footwear, hats, water etc and yet you see literally hundreds of people doing exactly the opposite … go figure.
One final point, if you do exercise outside at home in warm weather have a thought for your neighbours. I train with great intensity, panting, grunting and breathing heavily and apparently on more than one occasion some of the neighbours, from quite a distance away, have been in their gardens and been disturbed by what they thought was some sort of Adult film audition!

I digress, the main point is that the world climate is not always predictable but if you think, do a little planning and adapt the exercise accordingly then there is no excuse not to train be it sun, snow, fire or rain.