The Health Junkie: TBA RACE REPORT ... TOO HOT TO HANDLE!

The Health Junkie: TBA RACE REPORT ... TOO HOT TO HANDLE!: I decided to sign up for this event only 2 weeks ago. I was going to use it as just a simple training run for my Grand Canyon Rim to Rim la...
Posted by phil at 5:24 AM No comments:


I decided to sign up for this event only 2 weeks ago. I was going to use it as just a simple training run for my Grand Canyon Rim to Rim later this year but of course you get caught up in all the atmosphere and 'Bang' the starter 's gun goes off and suddenly you are in a race. It was hot as it started late at 2pm, they said it was about 78 degrees but it felt a lot hotter than that.
I'd forgotten what a mad scramble it is out of La Napoule. There were over 550 runners and within 5 minutes we hit a bottleneck as we squeezed onto a trail about 2 feet across surrounded by thick very prickly trees. It was mayhem. This was not my idea of a training run.
After about 15 minutes, as we started the first of many climbs, it thinned out but it was so hot.
﻿
﻿
I hadn't run in heat in a long time and the first climb of about 2000 feet was brutal. I found it very hard going, a climb like that would normally take me an hour but today it took about an hour and a half. It was a tough. The climb out of the Grand Canyon last month was easier and much further. Everyone kept saying the same thing, 'c'est dur' (its hard) and 'c'est chaud' (its hot) .... riveting conversation I know.
The next downhill section is very technical (rocky; slippy shale and stone, tree roots and steep) I did surprisingly well considering, I think I was just relieved not to be climbing anymore.
Then we came to the only Aid station on the 26k course. All they had was water and Coca cola and that was it. My American friends would have sued the management ! I had planned to go the whole way with my 2 litre Camelback and half litre side bottle instead I had to refill everything after only an hour and a half. There was no food, now this is not uncommon in France and I was carrying all my own stuff but still I think they could have done more. Normally I am full of praise for Aid station volunteers but the guy who helped me was rather belligerent (a bit like your average French waiter) it was very odd. Compared to the Aid stations in California it was like being on another planet.
I am sorry if I sound over critical but I saw many runners who had stopped, due to the effects of the heat, and I think organisers have a responsibility to factor these things in.
Next I hit a flat runnable bit which I know well and I was determined to overtake a few people, which I did, but then paid for it on the next climb. At this point I began searching for my S-caps and I just couldn't find them, this went on the whole race. The one time I really needed them in this heat and I'd lost them. Later when I started cramping I tried not to panic but it was really frustrating. (When I got home they were in a pocket that I had searched maybe 10 times during the race ...grrr!)
﻿
The next 2k climb of about 1000 feet was very painful and slow ... and this time nobody spoke.
﻿
I was relieved to get to the top, only to find out 5 minutes later that it wasn't the top; this was some training run. There were 2 descents and 2 more smaller climbs to go so I hit the descents hard and was really pleased that I kept my form and fortunately passed quite a few runners. I decided that although I was feeling tired due to the heat there was no reason why I shouldn't just 'man up' and run fast. I really think all the Tempo training I've been doing helped here as I knew how to run faster despite being tired, I just had to close my brain off and go.
﻿
﻿﻿       I'd used up 3 Isostar gels, 1 Shot blocks, 2 Gu gels, one Cliff Barr, 2 electrolyte drink powders, 2 gel shots and by the end, 5 litres of water ... now that's a lot of food and water for a race of this length.  As a comparison my Grand Canyon recce run took 3 hours - 15 minutes and only used a 1 litre of water and 2 gels.
On the last 2k stretch I passed a few more weary souls and kept up a good pace. With 1k to go there were 5 people just behind me and 3 in front. I was determined not to be passed; and then suddenly a light went on and I changed my state. I decide that I was going to pass the 3 in front and ignore those behind and it worked. I was suffering but I knew they were too and literally on the finish line I passed the last guy. This, in the greater scheme of things is not important but it just shows you what you can do, no matter how tired you are, if you are motivated. 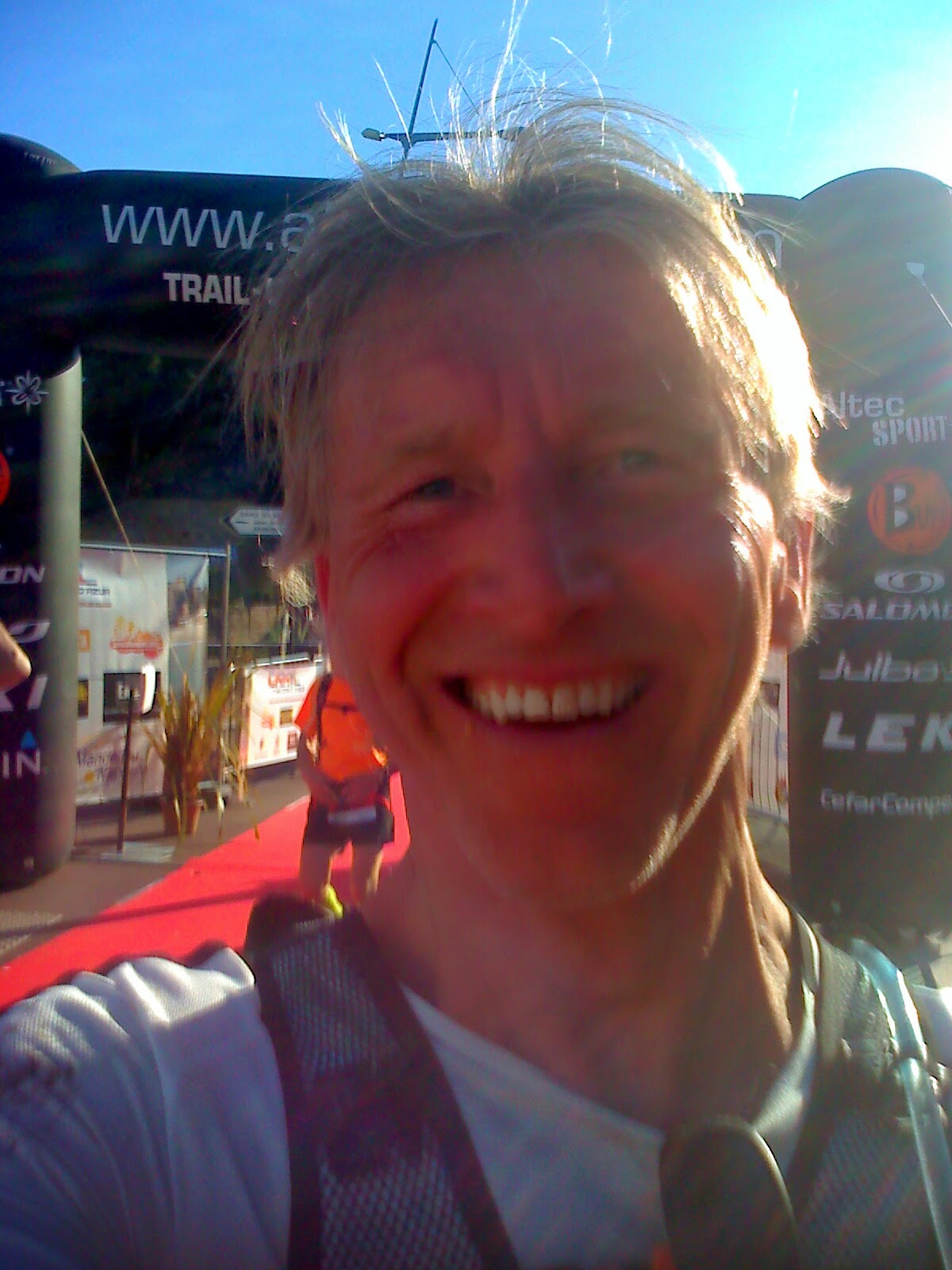 My overall time was 4 hours and 15 minutes; Studies have shown that performance can drop by as much as 15% on very hot days and especially over the elevation and terrain that I was running. Dr Tim Noakes has done extensive research on the Central Governor Model which suggests that your brain will make changes to your running as a defence mechanism long before you actually reach a point of dangerous fatigue or succumb to heat exhaustion.
In hot weather, this translates to feeling fatigued early as your body is actively adjusting your pace when it starts to overheat or the threat of overheating presents itself. Your muscles are actually nowhere near their true point of fatigue, but you are given the sensation as if they are so as to slow your pace down. I reckon on a cooler day it would have been nearer 3 and half hours but there you go. The total elevation climb was only about 3500 feet but the heat saps your strength and is just plain difficult, nevertheless it was a worthwhile experience as a 'heat' training run ....
The next day it was, rather annoyingly, 10 degrees cooler and overcast ... that's life.
Please click on the link below for a quick video of my run.
https://www.youtube.com/watch?v=swg-KJcPbKM&list=UUurzr-e4gafT5eTJ141Qz7Q