Sue and I went off to St Tropez last weekend to have a look at the trail I'll be running next month. Actually thats not true, Sue wanted lunch on the beach and I wanted to check out the trail, and although St Tropez may be very glamorous, the trail I'm running on is rugged and wild. It is on the peninsular and most of the coast line is inaccessible unless you take the rocky path around the headland. The only area where the tourists go is Pampelone beach which covers only 4k of the 32k course, the rest is really quite tricky, this surprised me as I was imagining lovely soft trails besides the azure blue ocean. After lunch Sue and I drove to the lighthouse at Cap Cammarat and then hiked down to the rocky exposed coves below. Half way down the twisting steep cliffs the rocks, roots and slippery surfaces were quite a challenge.... 'you don't run on this do you?' said Sue.....'Well yeah, that's why its called trail running'.........'you must be mad'. Well, there's nothing like support and encouragement.......and Sue certainly wasn't giving me any of that! I went off on a little recce and thought to myself , 'I hope the weather's good next month or this will be a nightmare,' and just as I said this the clouds began to roll in.....it felt like Brigadoon. I must have been tempting fate because we'd had lunch in warm sunshine and yet by 4:30pm the weather had turned into a storm of  almost biblical proportions.....bizarre.
By the time we got back home our house was flooded, roads were blocked and electricity cut....what a day. I do hope this wasn't an omen as I don't fancy running along the clifftops in that kind of weather....you could die of  exposure. I'd really like an easy 32k morning jaunt to get my legs working.... still, if there's one thing I  know about trail running in France it is that they're never easy; 32k should be a doddle but I suspect there'll be a few surprises. 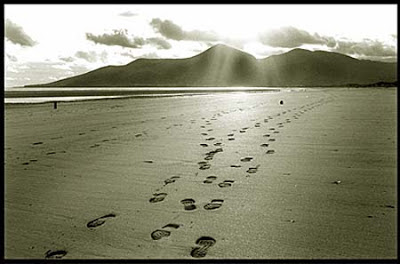 I've been doing a few beach and coastal runs to get the feel of the terrain but its difficult where I live because its not really the same trails as my normal hill and mountain running, which is a very different discipline. The danger is I may go off to fast and the problem then will be later on when I may just 'blow up'.........which basically means having unwittingly expended too much energy at the start you just run out of gas towards the end. Its all about pacing, when you're running up mountains the pacing kind of takes care of itself (well it does with me) but on flatter paths (even rocky ones) the tendency is to get caught up with all the excitement and get dragged along too quickly. I think this may have happened at the 'Way to Cool 50k' . I did the first 30 k in about 3 hours and then it all went a bit 'pear shaped' and I struggled for the rest of the race. Hopefully the rocky/beach surface will slow me down, (not that I'm quick).... and cool my ardour.
Just a another point about high intesity interval training, HIIT's. Just to simplify how all these different protocols work in relation to myself. It can all get very confusing but this is what I have found to be true. With 20 minute HIIT sessions I burn my glycogen (carbs) and fat but not muscle because the HIIT is very short. If I do runs longer than 60 minutes I will burn a similar amount, it just takes longer. If I do long runs  of 4 hours or more, I will burn carbs, fat........and muscle (if I don't fuel properly)....and as I explained previously the stress will cause me to even retain fat in certain areas. Anybody who saw me this time last year will tell you how thin and gaunt I looked, this was because of muscle loss or catabolism, my body was literally eating away at itself. I retained a normal healthy diet but because of my ultra running I should have been eating a lot more. My muscles were weak and so my performance actually detiorated throughout last year. My first ultra/marathon in the mountains at 42 k and 8,200 feet of elevation gain was one of my best performances time wise because I was very fit and strong and I had not, at that early stage, began the process of eating muscle.
This year I began the process of strengthening my muscles AND feeding them and then my body condition improved as well as my fitness. My last ultra was by far the hardest but my body felt good and performed well for the whole 10 hours, tired yes, but no quad or calf problems at all. I could still run the last 10 k reasonably well (just as I did in my first ultra) but my body condition and strength were totally different. Last Saturday I did a 23k training run in 2 hours and 30 mins that's about 9.2k per hour and 4,600 feet elevation gain. 18 months ago I did an 18k race with only 3,000 feet gain in 2 hours and 21 mins which is 7.6 k per hour. Basically I have improved a lot, I ran 1.6 k per hour quicker, 5k further and 1,600 feet higher and this was only a training run., if it had been a race I would have gone much faster.........(I can feel I'm losing some of you here).
The point is that high intensity workouts, strength, speed training, pilates, yoga and long aerobic runs all have there place, and they work, they are interdependant............BUT sometimes they are not, for example, very long 4/6 hour runs are not generally recommended by many fitness trainers.....unless your training for a marathon or ultra. My conundrum at the moment is that ultra running in itself is not the healthiest thing you can do. It hurts, you can get injured, it takes up a lot of training time, it is not good for your cardiovascular system, its mentally demanding and is occasionally dangerous, it is after all an extreme sport. I do it because its a challenge and I love being in the wilds of nature but, 4 HIITS and a bit of speed/strength training plus a few 10k runs every week would be much healthier. Still I suppose I could argue that smoking, drinking and over eating aren't very healthy either.....so I guess we all have a choice. As you can tell this conundrum is something I am struggling with.....now its one thing to struggle with it at home and quite another to struggle with it whilst doing it!........Did that make sense?  It would be at this point that my old friend Steve would have probably said, 'I think you need a drink.....I know I do'. I can see the headlines.....