My alarm went off at 5:45 AM in the beautiful 'gite' (farmhouse), where Sue and I were staying in Burgundy, (Wine country.....but not today). I calmly prepared all my stuff and ate immiediately so that I had fully digested my breakfast before the race. Carefully I taped and lubricated my feet and shoulders (the straps) and donned my gear. When Sue awoke she burst out laughing at this guy who looked like he was off to war...........I was.
Arriving at the race start everyone was strangely quiet. Only 17 runners had showed up. There were more officials than participants and yes you guessed it, I was by far the eldest.... and the only Brit.....they must have presumed I was some kind of foreign nutter...........
At 8:00 am we all trudged off into the morning mist. When you are running this far the worst thing you can do is think about the distance and time it will take, unfortunately thats all I could think about. The tracks were very uneven and I had to concentrate or you could easily twist your foot and speaking of feet, the sharp pain I was worried about before the race arrived almost immiediately. I thought 'well I can't stop here I've only gone 2 miles,  I'll just keep going'. 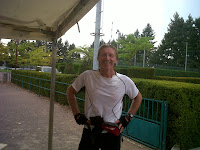 I arrived at the 10 k water checkpoint in one hour exactly, which was pretty fast for a trail run so this gave me confidence for the next 50k...........BIG MISTAKE. If I succeeded  today I would gain one point for entry into the UTMB 160k next year..... and they don't give these things away; The next 10k took one hour and 40 minutes and was just a series of relentless climbs. This race is also the equivalent of 6 Empire State buildings in height gain and it just doesn't stop.
At least I was running in the woods most of the time and although stunningly beautiful at first, they became mind numbingly monotonous after many hours. At about 25 k Sue met up with me on a road crossing with a muffin, soup and extra supplies. I was nearly in tears for two reasons, firstly at how hard it had already been and secondly at the thought of what was to come. Sue was very supportive....'You can do it .......we've come all this way......now just get on with it'.............and off I went feeling very sorry for myself.......pathetic isn't it? At the various stops they  provided us with 'endurance food'.........this consisted of some nuts, dates, water, a bit of cake and a few slices of spicy sausage, now I don't want to appear ungrateful but they have got to be kidding! That would keep my son Alexander and his friend Rory going for about 10 minutes. This is the exact reason why you have to carry your own stuff......mind you after 5 or 6 hours that all tastes like crap too. After one of these stops I felt physically sick and in fact one guy threw up in front of me........which was nice. 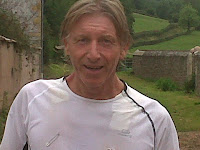 I got to the half way point in 3 hrs and 40 minutes and again this raised my spirits.....what I didn't know was that I had nearly another 6 hours to go! It was probably for the best because the next few hours were relentless misery. The exhaustive effects are cumulative and its like a war of attrition as more pain and fatigue builds on itself. If this all sounds a bit depressing then I apologise but this was my first endurance run, on a course I didn't know and this was definitely not fun. The trees and paths seemed to merge into one long never ending tunnel. On the very steep hills, you either shuffle up, power march or Euro hump.....(Don't get too excited:- Euro humping consist of pushing off your thighs with your hands and bent forward  in a strange bobbing motion....... Apparently American runners find it a bit odd because your body position is all wrong but it works so who cares). By now the pain in my foot had been overtaken by so many other pains that it all merged into a sort of endless melange of suffering.
Of course you start to ask yourself 'Why am I doing this?'....these are the doubts that creep into your mind telling you to quit.....'its impossible'.... 'give up'.......'what's the point ?' Fortunately, or unfortunately, my response to these doubts is always the same...'Pain is temporary, quiting is forever.'

I have read and studied this sport so much that I knew this negativity would creep in.......they warn you about it and that's why they say Endurance running is '90% mental and the other 10% is mental'. The problem is when you are 'IN' this zone you are so exhausted you either look for a way out......or you get angry at your pathetic behaviour..... I get angry, beat myself up and keep going.
I have used the word relentless a few times in this blog because that's what best describes the nature of the event, its painfully monotonous. However at 45 kilometres I began running quite fast on a downhill section and something unusual happened... I had an excruciating pain in my foot followed by a pssh!! It sounded like a can of coke being opened,in fact it was a huge blister bursting from my toe. I don't get blisters so this was a unique experience......what should I do?......What could I do? Nothing... So I just kept going as both feet now felt like some kind of painful government experiment into the effects of Bio -weaponry.
I think the most debilitating part of the day was that everytime I thought I was near to the next water stop, I would discover that it was another 5k away. I really didn't know I was going to make it until I could see the finish which was at the top of yet another hill.  9 hours and 15 minutes had passed since I had left the start that morning. As usual, just after I crossed the line I burst into tears, out of 17 people I was 10th. I had won the top veteran prize. (This was, of course, because I was the only veteran!) I felt numb. It is very difficult to describe how hard this is and impossible to describe why people do it. At the end of the day its a sense of accomplishment in doing something so few people do or perhaps would want to do.
I hope this blog that I began 5 months ago doesn't put you off this sport. Its called Ultra Endurance running because it teaches you to 'endure'. The definition of Endure, is to suffer or tolerate something panful or difficult, patiently. This run was the test or examination of all my training and at times sacrifice; it was never going to be easy but then most things worth achieving in life seldom are. I would like to thank everyone for their support  and Sue and Alexander for there unshakeable belief that I would do it.
There are huge benefits to be gained in health and physical wellbeing as well as a wonderful connection to nature when you are out on your own somewhere. The people in the sport have a unique bond and sense of camaraderie, I guess because we all know what everyone is going through. As a sidenote and not wishing to tempt fate, my back and knee that had given me pain for years never hurts at all. I am 50 LBS lighter than I was 3 or 4 years ago and feel great. There are many people who believe that running, at any age, is our natural state and that our bodies respond to this when we tap back into into our primeval state. It is modern thinking and the couch potatoe syndrome that says 'You mustn't do that its bad for you'.........It isn't, trust me, sure I accept that I have pushed it further than the norm but oddly the moment you reach the next level then that too becomes the norm. It is only 24 hours since I finished the race and I don't even feel tired (Pain is temporary).
Today when we got home and I was unpacking my car. a neighbour asked if I'd had a nice weekend and what had I been doing. 'Well' I said,  'a 60k run in Burgundy.'...........'You ran 60 kilometres?'.......'Yes'.............'But thats like one and a half marathons!'............'Yes and it was also 7,500 feet in elevation gain'................'But thats ridiculous'...........
'Yes'..I said....... 'I run ooltra's'.