Firstly, thanks to all for their advice and suggestions as regards the post analysis of my Ultra. Most comment by E-mail, Facebook or Twitter as I believe you need a Maths PhD to work out how to comment in the Blog Comments box! The advice ranged from push harder to listen to your body and take it easy as well as many practical tips. Helen suggested that my virus only cleared up about 3 days before the race and usually it takes about 7 days to be totally out of your system, Serpa mentioned that a survivor mechanism can kick in to protect the body when its extending to much and this can work as a kind of reserve ie. it holds something back just in case.......then of course age was listed..... .but only by the old people!..........

Anyway,  after much consultation I believe my endocrine system could be the problem and in particular the adrenal glands and the resulting hormones that they secrete. A general feeling of tiredness, lethargy and insomnia are some of the many symptoms of  an abused endocrine system and thats exactly what I felt half way through the race (as well as before) and its what predominates now........ My response of course is quite typical, go out and train more, which is what I did this week, thereby leading me nicely into the next problem; the pain in my foot.......yes, foot, it seems as if I have damaged the Metatarsal head. This can be caused by all sorts of things, none really make any sense because a podiatrist has checked my pronation etc and reworked the insoles and put in extra cushioning, but after about one hours running it starts hurting again no matter what shoe or padding I use. Its really annoying because the cure is the standard fare;- ice, massage, ibropropen, time, different shoes, rest, crosstrain, etc.etc and so, predictably, one hour into a 2 hour hill run and the pain was excruciating again. I stopped and pulled the insoles out completely which relieved it a bit so that I was able to get back home but its a worrying development as I have never had any problems like this before. Still, putting it all together  it would appear that the answer to this injury and the endocrine system is the same........REST. My body is basically stressed and as you may or may not know our bodies do not know the difference between work, emotional or physical stress......it just recognises stress and takes the appropriate action. There is a fine line between training to peak performance and over training and somewhere along the line I must have crossed over it.
However after training hard for many months to suddenly stop and ease up feels weird both psychologically and physically but I guess I'll just have to adjust and take it easy even though I feel basically 'okay' when running. The other issue is just a general one of feeling a bit down, which is not unusual after the 'high' of achieving a goal but this feeling is then further compounded by the withdrawal of my usual exercise routine. I don't 'do' negative so I need to plan my way back to mental and physical health. Also I really wanted to do my first night race this weekend but now I'm not so sure, as it will only be 3 weeks since my ultra and generally speaking it can take 4 weeks to recover fully. If I factor in my age as well I guess I should pace myself a bit more. There are a myriad of horror stories about guys who went out on a race 3/4 weeks after an ultra and felt fine but then lost it completely shortly afterwards and took months to recover. Its all new to me and everyone is different but the recovery aspect of endurance running is just as important as all the other parts and is therefore just another step in the learning experience. 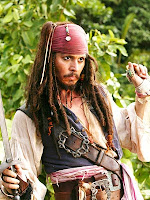 Of course if I did do the night run it could be fun, stuck up there in the hills, unable to move apart from hopping around on one leg in the pitch dark!!! .......All I would need then is a parrot, a stick, a few earrings and the odd tattoo and it would be Johnny Depp eat your heart out.....(actually Sue would probably quite like that)....
Then again perhaps I should just ease back on the ibropropen I think its making me delirious.
Posted by phil at 2:49 AM